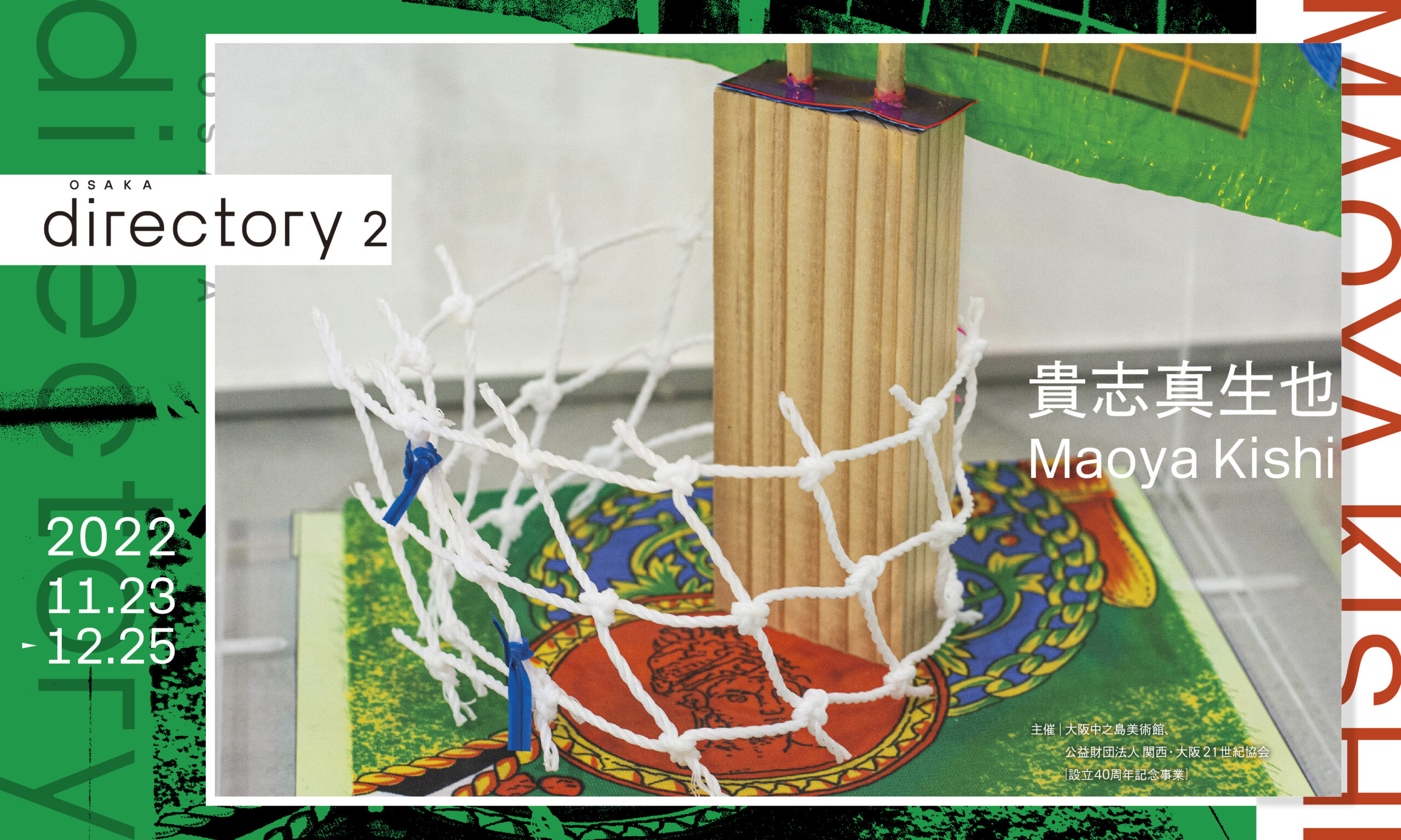 The Nakanoshima Museum of Art, Osaka and the Kansai Osaka 21st Century Association present a solo exhibition by Kishi Maoya as the second show in the Osaka Directory series.

Kishi Maoya (born in Osaka in 1986) creates three-dimensional works and installations using lumber, building materials, packing materials like polystyrene foam and blue tarps, and industrial products such as plastic materials and LED bulletin boards. His art, made by combining these materials that people come across in daily life, and which are hardly worked on by the artist, is reminiscent of handicraft class that children in school are familiar with, and also seems to serve as a metaphor for architecture and society. If creating things is working these materials into a different state, you could say that Kishi’s practice is trying to give form to the very act of ‘creating.’

Comprising a mix of existing works and new works for this show, the exhibition shines light on the artist’s ‘handwork,’ which appears to be something between materials used in the creation of art and finished artwork. While, at first glance, it may appear as if the materials are being used as is, Kishi’s art bestows upon them a different aura. While these things that we see in everyday life might be placed before us as is, they’ve been transformed into something we’ve never seen before. This provides a glimpse into the essence of what is for an artist to create art.

Key Works in the Exhibition

KISHI MaoyaBorn in Osaka Prefecture in 1986. Kishi graduated from Kyoto City University of Arts with a degree in sculpture in 2009. He uses environments created by humans, such as signs, buildings, and society as a whole, as motifs for art that questions the reasoning behind them. His major solo exhibitions include Little Castle (Kodama Gallery, Tokyo, 2009), Backronym (Kodama Gallery, Tokyo, 2010), Hanamuke (Farewell Gift) (Antenna Art Space, Kyoto, 2010), Mata Nozoki (Kobe Art Village Center, Hyogo, 2014), and Metaphysical (Kodama Gallery, Tokyo, 2022). Major group exhibitions include Real Japanesque: The Unique World of Japanese Contemporary (National Museum of Art, Osaka, Osaka, 2012). Kishi did a window display for Maison Hermès in 2011.

Organized jointly by the Nakanoshima Museum of Art, Osaka and the Kansai Osaka 21st Century Association, the Osaka Directory series of exhibitions introduces upcoming Kansai-connected artists in a solo exhibition format. Starting from the current year, the annual series will present artists who create new art symbolizing the coming age of the future. The term "directory" is used in IT(Information Technology) to refer to folders and similar structures that are used to organize files. Through this series, the Nakanoshima Museum of Art, Osaka stores ‘files’ on promising young artists in the Kansai area in a ‘directory’ from which it can present their work to a wide audience throughout the world and support the launch of their careers on the global scene.