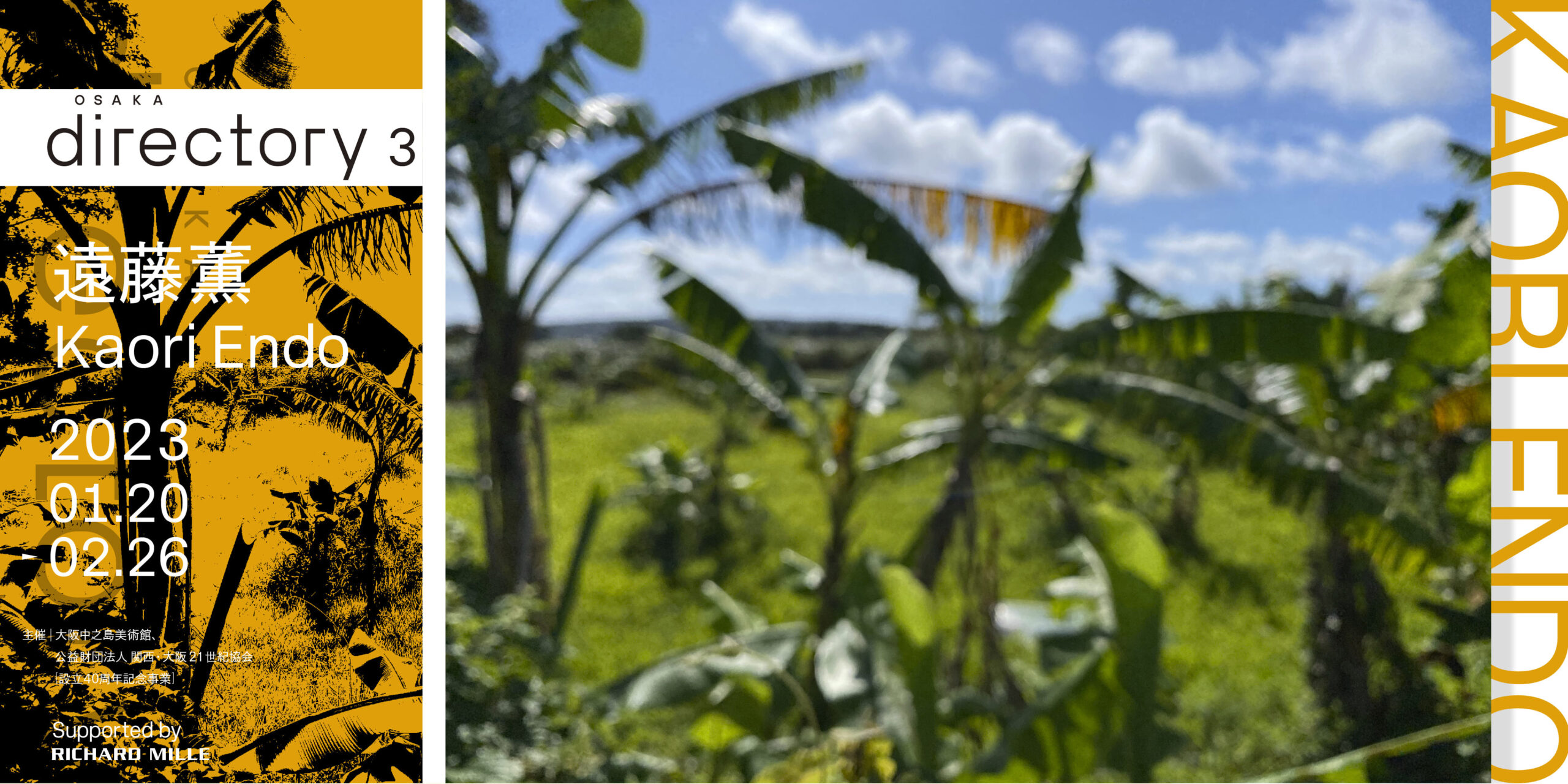 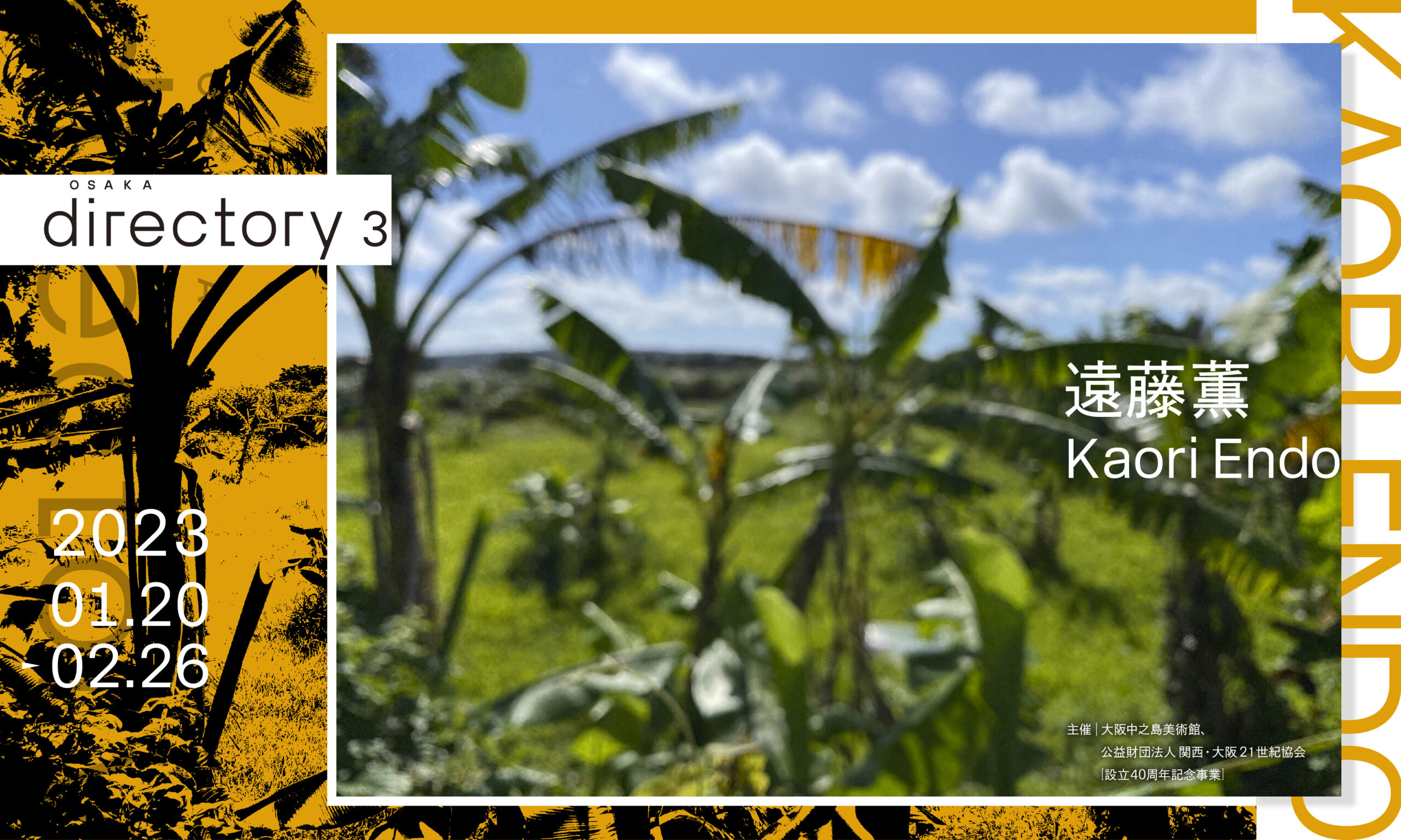 The Nakanoshima Museum of Art, Osaka and the Kansai Osaka 21st Century Association present a solo exhibition by Kaori Endo as the third show in the Osaka Directory supported by RICHARD MILLE series.

Born in Osaka in 1989, artist Kaori Endo unravels the close relationship between politics and kogei crafts, history, and people’s lives in various parts of the world, producing works that typically involve cloth. The act of “using” her works expresses the place that crafts have in society.

This exhibition presents a dugout canoe made on Ishigaki Island for this show. This traditional wooden boats that have long been used in the Southwest Islands that stretch between Kyushu and Taiwan and include Okinawa. They were used for both fishing and transporting goods until the 1950s. The sail of the boat exhibited here was made from the fibers of the Japanese fiber Ryukyu-banana (Ito-basho) plant that grows on farmland that has been tacitly permitted on the grounds of the U.S. Kadena Air Base in Okinawa. Endo extracted the fiber herself, wove it into Ryukyu-banana fiber cloth, known as basho-fu, and turned that into a sail. By reference to the legend of Paipateroma—which involves basho-fu cloth and the Yaeyama Islands in Okinawa—and by using Okinawa folkcrafts that incorporate by-products from U.S. bases, the artist directs her gaze at gentle yet poignant human behavior that implies neither weakness nor strength. This installation by Endo allows the viewer to sense the fact that the things people have come to use in their daily lives have a political and historical background to them that is an inseparable part of the memories of the people who live there.

* The Myth of Paipateroma is a mythical island that supposedly lies south of Hateruma, the southernmost island of Okinawa.

Examples of the artist’s work

ENDO KaoriBorn in Osaka Prefecture in 1989. Endo obtained a bachelor’s degree in textiles from the Okinawa Prefectural University of Arts in 2013. She graduated from Ars Shimura, a school run by Shimura Fukumi, in 2016. Endo produces works using mainly weaving and dyeing techniques, and unraveling the close relationship between politics and kogei crafts, history, and people’s lives in Okinawa, Tohoku, and other parts of the world. The core of her artistic practice is about expanding the potential of kogei crafts by producing materials such as rags, parachutes, and sails, and tracing the vitality of textiles and people by putting the materials to use with her own body in a performative way. Recent exhibitions include the 13th shiseido art egg (Shiseido Gallery、Tokyo, 2019), for which she won the art egg prize, Welcome, Stranger, to this Place (The University Art Museum, Tokyo University of the Arts, Tokyo, 2021 ), and Portraits of Ryukyu; Turnover from the models to artists (Okinawa Prefectural Museum and Art Museum, Okinawa, 2021).

Organized jointly by the Nakanoshima Museum of Art, Osaka and the Kansai Osaka 21st Century Association, the Osaka Directory series of exhibitions introduces upcoming Kansai-connected artists in a solo exhibition format. Starting from the current year, the annual series will present artists who create new art symbolizing the coming age of the future. The term "directory" is used in IT(Information Technology) to refer to folders and similar structures that are used to organize files. Through this series, the Nakanoshima Museum of Art, Osaka stores ‘files’ on promising young artists in the Kansai area in a ‘directory’ from which it can present their work to a wide audience throughout the world and support the launch of their careers on the global scene.