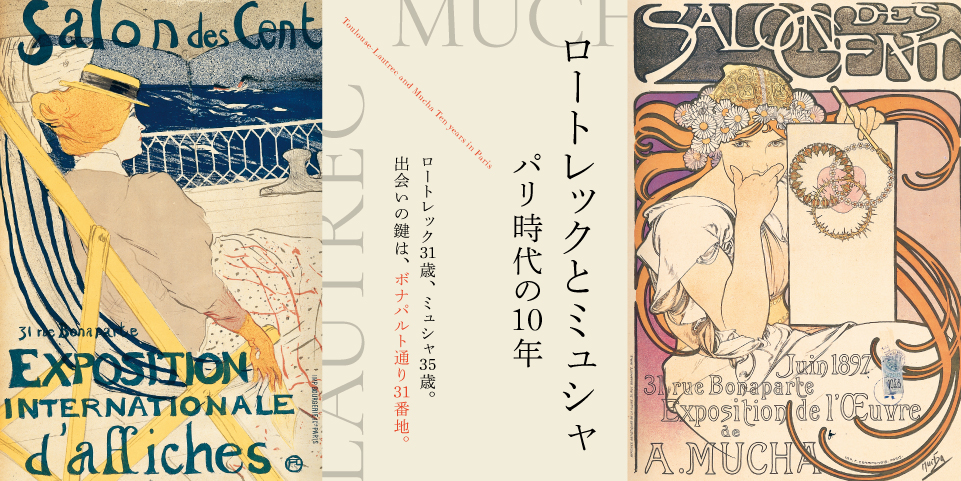 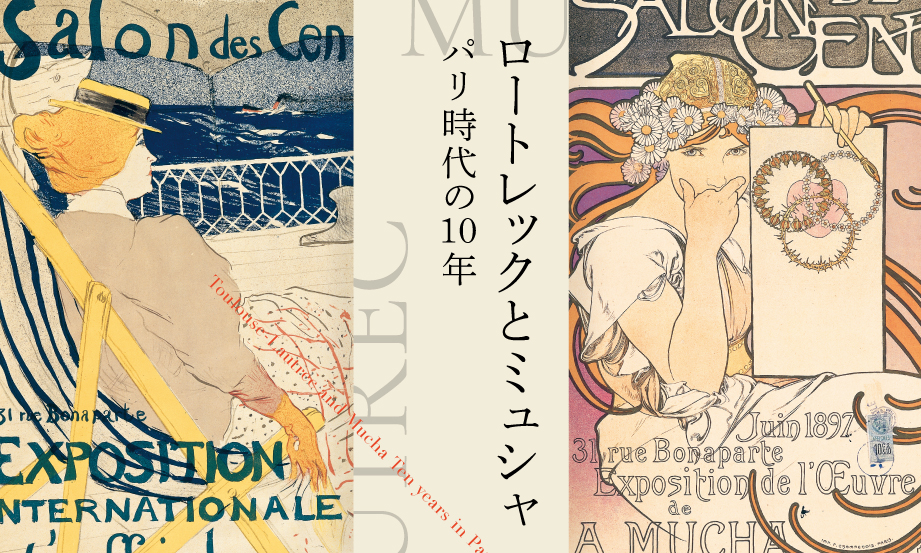 While both artists found themselves thrust into the limelight thanks to their first posters, they worked in different parts of central Paris on opposite sides of the River Seine, with Toulouse-Lautrec in Montmartre, and Mucha in Montparnasse. This show focuses on the two artists—poster artists who were two leading artists of La Belle Époque—taking note of aspects involved in their creative output, such as their studios, printers, and clients.

The show provides a very rare opportunity to view a wide variety of works, presenting all thirty-one priceless posters that Toulouse-Lautrec put out in a mere decade, as well as different states* and test prints, something made possible thanks to the Suntory Poster Collection deposited with the Nakanoshima Museum of Art, Osaka.

* “States” refers to different forms of a print in which the same work is produced differently, for example, with different colors of ink or before the addition of text, all of which are completed works constituting various variations, differentiated by being referred to as “first state” and “second state,” etc.

Toulouse-Lautrec debuted the poster Moulin Rouge―La Goulue for a café-concert in October 1891, and received great acclaim for it, leading him to devote himself to lithographs. Mucha was producing illustrations for magazines at about that time, but in 1894, he received a commission during the Christmas season to produce a theater poster, Gismonda, which went on to become an immediate sensation. Popular success with their very first poster is one of the things that Toulouse-Lautrec and Mucha have in common. * A café-concert was a leisure and entertainment facility and place for special events where customers enjoyed food, drink, and conversation, an establishment serving as both a dance hall and concert hall that was characteristic of entertainment districts in Paris at the end of the nineteenth century.

From 1895 to 1897, exhibitions held and organized at the art gallery Salon des Cent by the literary magazine La Plume were the most likely point of contact between the two artists. During this time, both Toulouse-Lautrec and Mucha were very productive, producing lithographs for a wide range of commissions and showing their work at numerous shows, as well as holding solo exhibitions.

This was a period when Toulouse-Lautrec’s health was deteriorating. He poured his energy into drawing, and delivered a drawing for Au Bal des Étudiants, considered to be his last poster. Meanwhile, Mucha made a substantial contribution to Expo 1900 Paris through the Austrian Pavilion and the Bosnia-Herzegovina Pavilion. His efforts were recognized by the Austrian government, which made him a Knight of the Order of Franz Joseph I.

In 1901, Toulouse-Lautrec died at the age of thirty-six at Château Malromé, the home of his beloved mother, Countess Adèle de Toulouse-Lautrec. Mucha, who found new resolve to create art for the sake of his Czech homeland thanks to Expo 1900 Paris, left Paris, traveling to America before returning to western Bohemia (the Czech Republic today). Around this time, he published Documents Décoratifs (1902) , representing a culmination of his work in Paris, presenting patterns and motifs demonstrating the marvelous maturity and perfection of his style.

Chapters5 Drink posters from Toulouse-Lautrec and Mucha's time in Paris

Toulouse-Lautrec and Mucha were in Paris at a time when the population was growing, the entertainment districts were booming, the demand for leisure was rising, and manufacturing industry was increasingly active. These factors led to growth in the manufacture and sale of alcoholic beverages, and large numbers of posters were produced to advertise such drinks. The show presents contemporaneous lithograph posters for alcoholic beverages, such as Pierre Bonnard’s France-Champagne (1891).

An old map of Paris shows locations related to Toulouse-Lautrec and Mucha.

All the works in the images on this webpage are from the Suntory Poster Collection deposited with the Nakanoshima Museum of Art, Osaka.

Did Toulouse-Lautrec and Mucha meet?—Exploring the possibility and timing of potential encounters